In 2020, the Microdosing Institute has developed a new microdosing stacking formula. It combines the Cordyceps mushroom with Microdosing XP Truffles (psilocybin) and vitamin B12. 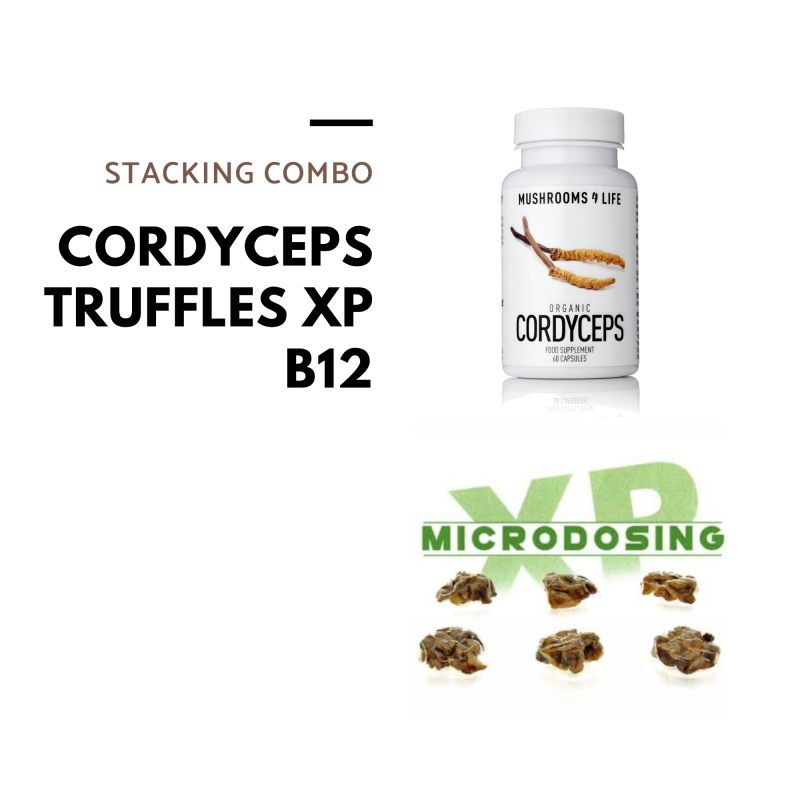 Originally, the Cordyceps mushroom could be found in the highlands of Tibet, Nepal and China, where its value could be rated up to $30,000 per kilo. Nowadays, it is cultivated on a large scale in a conditioned environment, because of its special properties and high demand. This mushroom can be found in two varieties: Cordyceps sinensis and Cordyceps militaris. The latter is more common in the wild and also appears as a medicinal mushroom, although it has different medicinal components than Cordyceps sinensis.

Use of Cordyceps has a long successful history. It supports treatments of numerous conditions, ranging from libido complaints, to cancer (including soothing the side effects of chemotherapy). Cordyceps is seen in general as a mushroom which promotes the balance between yin and yang and works through the kidney and lung meridians.

While guiding people through their microdosing journeys, we’ve noticed that some of them sometimes experience fatigue.That mostly happens with microdosing magic truffles or magic mushrooms. The combination with Cordyceps and vitamin B12 can be a solution for that, as it stimulates the energy metabolism and increases endurance.

The combination of Cordyceps with vitamin B12 is well-known and widely used in the sports world for boosting energy, stamina and better sports performance. In 1992, during the Olympic Games, Chinese team using Cordyceps put in an impressive performance and broke several world records. The use of banner steroids was immediately considered, but soon it became clear that Cordyceps was the key to their success.

There was lots of research conducted on qualities of Cordyceps both in the West and Far East, which ended with a positive result. Cordyceps is known for stimulating the immune system. It is a powerful mushroom that is claimed to have strong anti-viral and anti-oxidative effects as well as adaptogenic qualities, which means that it helps the body to resist stressors and quickly adapt to extreme situations and stress. Cordyceps promotes cellular energy production, oxygen utilization and stimulates blood circulation in all organ systems. This partly explains why it increases performance and mental clarity.

Cordyceps is also known as a libido stimulant for both men and women. In addition, it has an increasing effect on the quality of male sex hormones and thus on the sperm. For women, it has been scientifically proven that Cordyceps increases hormone levels and thus female fertility. This can lead to more success with in vitro fertilisation.

70% of people who use cordyceps experience an increase in libido. Cordyceps sinensis is also called the 'Himalyan Viagra'.

Moreover, research shows that Cordyceps has a positive effect on liver diseases such as hepatitis B, liver cirrhosis and (alcoholic) liver damage. It also has a lowering effect on LDL cholesterol: Cordyceps gives a significant increase in the (good) HDL cholesterol.

Benefits of Cordyceps can be also noticed in its influence on the respiratory tract. The beneficial effect is scientifically endorsed in conditions such as chronic bronchitis, asthma and COPD. People with kidney complaints can also benefit from Cordyceps as it contributes to a better kidney function in patients with renal impairment or renal insufficiency.

In cancer treatment, Cordyceps is used for thyroid, bladder and breast cancers. It strengthens the chemotherapy treatment as well as mitigates the side effects. Cordyceps also interacts well with hormone therapies and antidepressants.

Use of Cordyceps is not recommended for:

Vitamin B12 (cobalamin) is an essential vitamin which the body needs. It is required for the production of red blood cells, which are responsible for carrying oxygen in the blood. In addition, vitamin B12 is necessary for proper functioning of the nervous system. It promotes metabolism, so that more energy can be released from food.

Vitamin B12 can be naturally found in animal products such as milk, dairy products, meat, fish and eggs. But it’s also available as an oral supplement.

Stacking Cordyceps according to the Microdosing Institute Protocol

EVERY OTHER DAY:
0.5 – 1g of Microdosing XP Truffles

CYCLE: Continue this cycle for 1 month
REST: At least 2 to 4 weeks of rest

If at any moment it will feel uncomfortable for you, reduce the microdose, or just stop.

Note: Cordyceps and vitamin B12 can be also used during the reset pause (so you only make a pause on microdosing psilocybin). B12 is an essential building block, especially important for vegetarians and vegans. Cordyceps has no psychoactive effect, but it does give more energy.

Our readers are keen to read all sorts of experience reports from microdosers.
Do you have experience with stacking and would you like to share your story? Contact us.

5 REASONS WHY MICRODOSING DOESN'T WORK FOR YOU

By leaving my email address, I consent to the Microdosing Institue sending me personalized emails including but not limited to messages concerning events and promotions.