LSD is one of the most well-known and culturally influential psychedelic substances. LSD, also known as “acid” is an abbreviation from the chemical name of the molecule in German Lysergsäure-diethylamide (in English: lysergic acid dimethylamine). It’s a basic chemical structure found in the ergot alkaloids of the grain fungus ergot. Although LSD is produced in a laboratory, it’s semi-synthetic since the raw material is found in nature. Sometimes it’s considered to be the first modern entheogen, a category that is otherwise limited to traditional earth medicines such magic mushrooms  San Pedro, and Ayahuasca.

The main reasons why people choose to microdose with LSD include:

First, let’s clear up some misconceptions about LSD:

Swiss chemist Albert Hofman first synthesized LSD in 1938 but only (accidentally) discovered its psychoactive effects on April 19th, 1943. At the laboratory in Basel where he was working at the time, he ingested what’s in pharmacology considered a tiny amount of the substance, namely 250 micrograms (this turned out to be what nowadays is called a macrodose of LSD). He started to feel a bit disoriented and biked home, where he was the first person ever to experience the intense hallucinogenic effects of LSD. Psychonauts now annually commemorate the LSD discovery day and the first “acid trip” on April 19th as Bicycle Day. 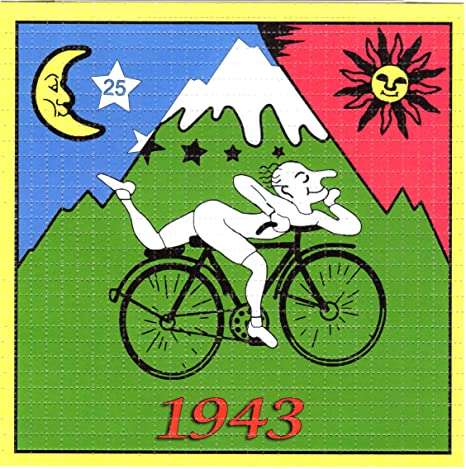 In the 1950s, LSD was used as an experimental drug in psychotherapy and scientific research, mainly to treat anxiety, depression, addiction, and psychosomatic disorders. In the following years, the interest for the new substance grew and was wide-ranging; from medical professionals, scientists, and even the US government. The infamous CIA program code-named MK ULTRA investigated the application of LSD for “mind control” and chemical warfare. CIA employees, military people, doctors, prostitutes, mentally ill patients, and members of the public were all given LSD without their knowledge or agreement, resulting in at least one death.

In the 1960s, LSD played a central role in the counter culture movement due to its consciousness-expanding properties, eventually leading to its prohibition in 1971. After nearly 10,000 publications of scientific papers on LSD, the extensive research came to an abrupt stop. The last FDA-approved study with LSD was conducted in 1980, and for nearly forty years, further research into the effects and potential benefits of LSD lay dormant.

Finally, in 2016, The Beckley/Imperial Research Programme published the world’s first images of the human brain on LSD, revealing some of the fundamental mechanisms behind its profound consciousness-altering effects. Today, many people worldwide have greatly benefitted from using this substance through therapeutic journeys or, more recently, by microdosing LSD.

Worldwide, LSD is listed as a Schedule 1 drug, which means that it’s considered to have “no currently accepted medical use and a high potential for abuse“. Nevertheless, medical and scientific research into LSD in humans is allowed under the 1971 UN Convention, although it has proven extremely challenging to carry out in practice.

Regardless of its legal status, many people still decide to microdose with LSD. Therefore, we believe it’s essential to provide reliable information about microdosing LSD. It’s up to you to make a well-considered choice while being fully aware of the risks. If you don’t want to take any risks regarding the legality, choose decriminalized substances, such as magic mushrooms in Oregon (and other US states to follow) or magic truffles in the Netherlands. LSD is available in the underground circuit in liquid or as a blotter (paper strip). With the latter, liquid LSD has already been dripped onto a piece of paper.

The effects of LSD

LSD is the most potent psychedelic that exists. The fact that the dose measured in micrograms (one-thousandth of a milligram) says it all. It’s taken orally via a paper trip that is placed on or under the tongue or its swallowed. When swallowed, you notice the effects after 30 to 90 minutes. Under the tongue, it works faster than when swallowed because it’s absorbed directly through the oral mucosa.

An LSD trip lasts on average eight to twelve hours and goes in waves, but depending on your sensitivity, it can last longer. Like other psychedelics, LSD is not addictive. In a light trip, you are high and maintain a certain degree of control and overview. With a heavy trip, this disappears, and there is no more control. Thinking is highly associative and seems to go in circles.

An LSD trip is a highly intense experience, and it’s not something most people want to do regularly. However, people commonly report mystical-type experiences that can facilitate self-reflection and personal growth. In addition, you cannot use LSD for days in a row because tolerance increases so quickly that trip effects no longer occur. The habituation, or tolerance, also builds off just as quickly.

As a result, users often wait several weeks or even months before using LSD again. Therefore, the chance of addiction is hardly there. However, people can become mentally dependent on the tripping experience itself (not the substance) in more exceptional cases. These are usually people who also take many other mind-altering drugs. In essence, mental dependence is possible with anything.

The subjective effects of high doses LSD include:

The pharmacology of LSD is complex, and its mechanisms of action are still not completely understood. However, we know that LSD works on the serotonin receptors in the brain, which causes euphoria in most people.

Unlike other highly prohibited substances, no one has proven that LSD is physiologically toxic or addictive. However, adverse psychological reactions can happen to people predisposed to psychological or psychiatric disorders.

The most considerable risk lies in people selling other substances as LSD, including more potent and harmful substances such as DOB or 25i-NBOMe. However, this rarely happens, and you can completely eliminate this risk by testing the LSD at either a testing service or with an LSD test kit.

When microdosing LSD, people usually take 1/20 to 1/10 of a 100 micrograms paper blotter. This means a microdose of LSD is usually between 5 and 10 micrograms. However, the amount of LSD needed may vary per time and person, depending on physical and mental condition, gut biome, environment, and potency of the LSD. Therefore, we advise against blindly taking the same microdose as someone else; rather start low and go slow to find your ideal dose (sweet spot). Additionally, LSD blotters come in different strengths, and it’s crucial to determine how many micrograms of LSD your blotter contains.

NOTE: Many first-time microdosers think they had found an easy solution: cut the blotter into 10 or 20 equal pieces (although the piece of paper can be tiny). We advise against this. It’s likely the LSD is unevenly distributed over the blotter. As a result, some of your microdoses will be mini doses and other less than a microdose.

The threshold level (the amount at which people start to notice a mild psychedelic effect) varies but is usually between 10 and 50 micrograms. The (sub-perceptual) effect of a microdose of LSD can last for up to 10 hours, which makes the time of ingestion especially important. We recommend to take your LSD microdose before 10:00 AM. If you want to have a shorter experience, consider microdosing with magic mushrooms.

When microdosers describe their experiences with LSD, they often report an increase in creativity, energy, problem-solving capacity, and focus. Nonetheless, like with all psychedelics, we believe this is a subjective experience. Additionally, LSD is a non-specific amplifier, meaning that, for example, your creativity may emerge when you work with art or music. But, if you choose to have a good conversation with a loved one, there might be more emphasis on connection, reflection, or emotions.

The health risks of taking LSD are mostly psychological rather than physiological. LSD is not dangerous to the body or brain itself, but can pose psychological risks. In fact, LSD is one of the safest psychoactive substances because the difference between an active dose and an overdose is extremely large. Where one takes around 100 micrograms to trip, the LD50 (lethal dose for 50% of the test animals) is estimated to be more than 1000 times higher.

As far as modern science knows, LSD doesn’t cause damage to the body in both short and long term, and after 24–48 hours the substance is completely removed from the body. Physical overdose is therefore (almost) impossible, but that doesn’t mean that microdosing LSD–like many activities–completely risk-free.

One potential concern is found for microdoses of LSD in people with pre-existing heart conditions, which comes from studies demonstrating that fenfluramine, when taken daily, doubles the risk of Valvular Heart Disease. Fenfluramine binds to the same receptors as LSD and psilocybin, but the quantities used for microdosing are extremely low in comparison. More research is needed to know if this potential risk effectively translates to humans who microdose with LSD. The current stance in science is that the microdosing protocols of 10-weeks, with a 4-week pause afterwards, are sufficiently protective for microdosers. If you have a pre-existing heart condition, it’s advised to avoid extended periods of microdosing.

How to prepare your dose for microdosing LSD—volumetric dosing

First, to ensure you get identical dosages of LSD and avoid the risk of your dosages being too high or too low; use the volumetric dosing method.

If you are in the European Union, you can order a set for volumetric microdosing here (without the active substance). 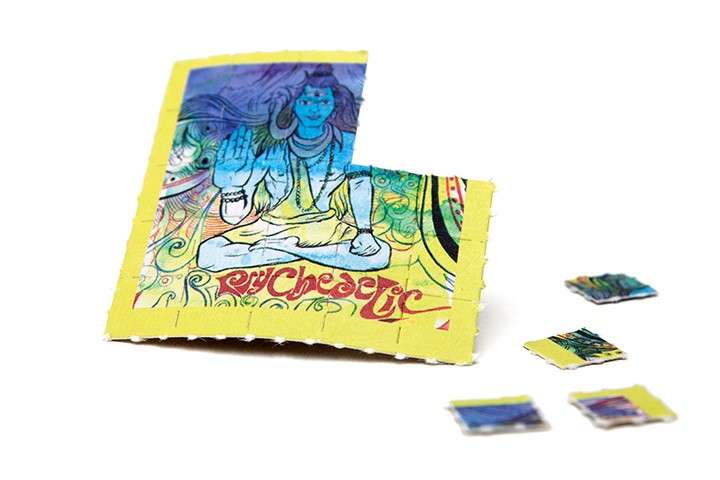 How to measure your LSD microdose accurately

To ensure that you microdose 100% accurately, research chemicals can be a safer option. These substances are produced legally in a lab, which guarantees the potency they indicate. In contrast, LSD is being sold on the black market and a vendor will often tell you their supply is more potent than it actually is. Our partner shop sells ready-to-use 1cP-LSD bottles for microdosing (EU customers only).