The possession and sales of LSD are illegal everywhere in the world, but these analogues are unregulated in most countries. Given that they are pharmacologically almost identical, many microdosers opt for one of these analogues as an alternative to microdosing LSD. This is why we’ve decided to include information on microdosing 1p-LSD and 1cP-LSD on this platform.

The exact origins of 1cP-LSD & 1P-LSD are unknown. 1P-LSD has been available for purchase on the internet since 2015, but it’s not clear when precisely it has been synthesized for the first time. Unlike many other research chemicals, 1P-LSD has no records in the research literature before its emergence on the market in 2015. 1P-LSD was once a widely popular prodrug in Germany, but it got banned in July 2019.

However, this might only be a matter of time. In Germany, the NpSG was already enforced on the 3rd of July 2021, effectively banning 1cP-LSD along with 1cP-LSD and other substances. Even with substances covered by the NpSG, consumption or possession are not penalized; however, purchasing is.

Difference between 1p-LSD & 1cP-LSD and LSD

The fundamental distinction between 1P-LSD, 1V-LSD and 1cP-LSD and LSD and is that 1P-LSD & 1cP-LSD need to be first broken down to LSD in the body before having an effect. 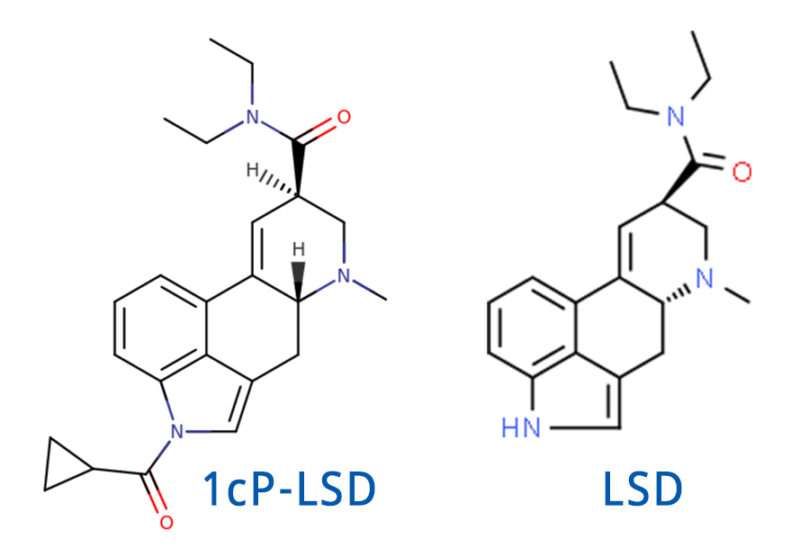 Based on their structural similarities to LSD, 1P-LSD & 1cP-LSD, the psychedelic effects probably come from its efficacy at the serotine receptors throughout the brain. 1P-LSD & 1cP-LSD also likely display binding activity at a wide range of monoamine receptors, such as those for dopamine and norepinephrine. However, there is no evidence to back up these statements at this time.

Because they are research chemicals with essentially no history of human usage, the toxicity and long-term health implications of recreational 1cP-LSD & 1P-LSD use have not been researched. However, there appears to be no toxicity and no link to mental health issues, equal to LSD.

For this section, we rely on the known health risks of using LSD—a substance that has been widely studied and used since 1943. It’s been shown that LSD is not physiologically toxic or addictive. However, adverse psychological reactions can happen to people predisposed to psychological or psychiatric disorders.

The most considerable risk of purchasing LSD lies in people selling other substances as LSD, including more potent and harmful substances such as DOB or 25i-NBOMe. Remember, this is not the case for 1cP-LSD & 1P-LSD, which can be purchased directly from the producing laboratories and legitimate online shops.

As far as modern science knows, LSD doesn’t cause damage to the body in both short and long term, and after 24-48 hours all the substance needed for one trip is completely removed from the body. Physical overdose is therefore almost impossible, but that doesn’t mean that microdosing LSD– like many activities – is completely risk-free.

One potential concern is found for microdoses of LSD in people with pre-existing heart conditions, which comes from studies demonstrating that fenfluramine, when taken daily, doubles the risk of Valvular Heart Disease. Fenfluramine binds to the same receptors as LSD and these analogues, but the quantities used for microdosing are extremely low in comparison. More research is needed to know if this potential risk effectively translates to humans who microdose with LSD. The current stance in science is that the microdosing protocols of 10-weeks, with a 4-week pause afterwards, are sufficiently protective for microdosers. It is always wise to stick to the recommended protocols and take a break, but if you have a pre-existing heart condition, for sure it’s advised to avoid extended periods of microdosing.

1P-LSD & 1cP-LSD are most commonly sold as paper blotters for research purposes only.

The effect of LSD lasts 10–12 hours. For 1P-LSD or 1cP-LSD, we must take into account 1 hours until the onset and then 8-10 hours. Due to this extended duration of the effect (which can be described as energizing, creative and productive), most people start their microdose research with 1P-LSD or 1cP-LSD early in the morning. This will prevent wakefulness until late in the evening.