One of the most frequently asked questions about microdosing is: is microdosing safe? In other words, what are the risks of microdosing? Unfortunately, stories of  LSD and magic mushrooms, psychoses, acute schizophrenia, and flashbacks have given psychedelics an unfortunate reputation. These stories date to the 1960s and are primarily attributed to exaggerated propaganda from the War on Drugs.

The risks of psychedelics in a high dosage have been well studied and documented. As it turns out, psychedelics are among the safest substances on the “drugs” spectrum—below weed, alcohol, and MDMA. 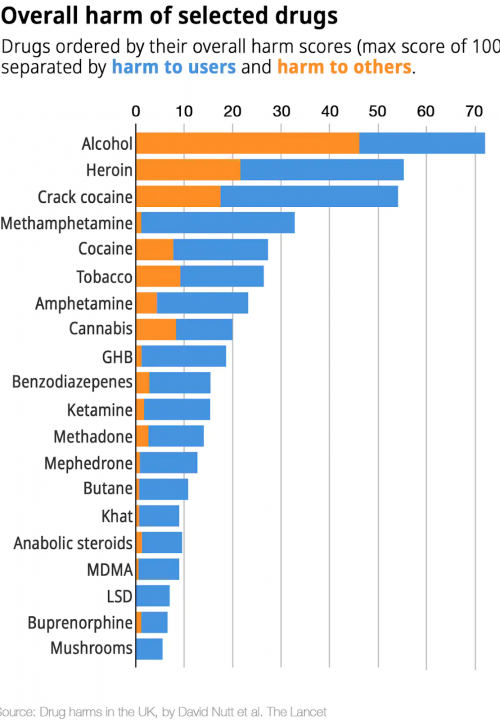 It’s tempting to assume that when microdosing — taking a small amount of a psychedelic substance — that the risk will also become smaller. However, this is a false assumption, and anecdotal evidence does show that microdosing can have some risks. Our understanding of the direct physiological effects of microdosing is currently limited, but gaining ground as more clinical studies on the practice are taking place. For now, we must rely on what we know about higher dosages as well as the side effects, and contraindications reported by experimental microdosers.

A provisional starting point for the risks of microdosing

Dr. James Fadiman and Sophia Korb have collected over 1850 reports of experiences from microdosers across 59 countries. In these reports, there were only 75 people in total (less than 4% of all participants) that reported not to have had a positive experience when microdosing. These reports have not only helped map the potential risks associated with microdosing and helped identify best harm reduction practices, but have also led Fadiman and Korb to conclude that microdosing is overwhelmingly safe for most people.

The risks of microdosing depend on the specific situation, person, and substance, and therefore it’s important to be research best practices thoroughly, institute basic harm reduction principles, and when in doubt consult a medical professional before beginning a microdosing journey.

The most well-known risks of microdosing are:

Among Fadiman’s gathered responses of microdosers, there was not a single case of  reported psychosis, a risk that requires strong consideration when taking a high dose. However, while no known anecdotal reports exist, it is important to note that this does not rule out the possibility of psychosis triggered by microdosing.

Lesser known risks of microdosing include:

In Dr. Fadiman’s collected reports, some men with color blindness reported seeing tracers in their field of view. Sometimes those images or lingering colors persisted for days. Not all people with color blindness experienced this, but there is a chance that it will occur.

One potential concern for microdoses of LSD or psilocybin for people with pre-existing heart conditions was published by Dr. Kelan Thomas in 2022. This concern comes from studies demonstrating that fenfluramine, when taken daily, doubles the risk of Valvular Heart Disease. Fenfluramine binds to the same receptors as LSD and psilocybin, but the quantities used for microdosing are extremely low in comparison (several orders of magnitude less than a regular dose). More research is needed to know if this potential risk effectively translates to humans who microdose with LSD or even psilocybin.

People experiencing tinnitus have reported that their tinnitus (ringing in the ears) worsened during microdosing, it didn’t stop their tinnitus, or it stayed the same.

When is microdosing not recommended?

Additionally, while some people with generalized or social anxiety have experienced relief from microdosing, anxiety can often be magnified and it is advised to proceed with caution and only with the support of a psychedelic-informed therapist.

General note: the full spectrum of potential risks of microdosing alongside mental or physical disorders are not yet sufficiently known.

What do we know about the safety of microdosing?

Are these findings and comments decisive when it comes to safety? We don’t think so. The long-term effects of microdosing are not yet known. Dr. James Fadiman especially wants to emphasize that the benefits of microdosing far outweigh the risks. And not all disadvantages mentioned are also a risk of microdosing: some might be merely a point of attention or something to consider. 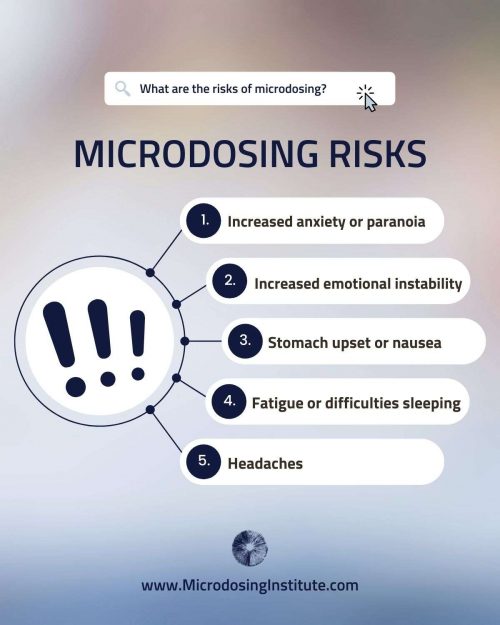 Other considerations for harm reduction:

Microdosing in combination with medication

This list is a result of their long-term research with hundreds of subjects worldwide who have microdosed independently with (mainly) LSD, 1P-LSD, and psilocybin.  We want to emphasize that this list does not guarantee that you can microdose safely and responsibly while taking any medications listed.

While some may feel that microdosing is a better alternative to other medications, always consult your doctor first if you plan to combine, stop or phase out any medication.

Have you experienced any interactions with microdosing in combination with your medication(s)?  Please, let us know.

What do experts say about the risks of microdosing?

David Presti, professor of neurobiology at the University of California, Berkeley, and expert on the effects of drugs on the brain, stated that microdosing is much safer than taking antidepressants. James Rucker, a psychiatrist affiliated with King’s College London, has called for psychedelics to be reclassified—making them better examined and more available to researchers. However, he’s cautious. In the interview with BBC, he said: “If you look at the medical side of microdosing, we don’t know anything yet. We don’t know the long-term effects yet”.

While anecdotal reports have provided a fantastic base for understanding best practices and harm reduction methods, there is still a strong need for further scientific inquiry into microdosing. Dr. Fadiman thinks this won’t take very long; “As long as we continue to find that microdosing has a very beneficial benefit-risk ratio, we expect more pressure from the medical world to use [microdosing] with complaints or disorders that we have not been able to help so far”.

In a perfect world, I think we would microdose LSD instead of giving teenagers Adderall. But I'd like to see it studied first.

The content on this website and the other Microdosing Institute channels is for informational and educational purposes only, and does not substitute professional medical advice or consultation with healthcare professionals. If you are seeking medical advice, diagnose, or treatment, we advise you to consult a medical professional or healthcare provider. Equally, we cannot help with the sourcing of illegal substances.