In addition to many regular good experiences with microdosing, positive medicinal effects have also been reported by test subjects from all over the world. In James Fadiman’s research, the most positively satisfying results were reported in the following complaints/disorders:

However, the medicinal effects of microdosing have not been clinically studied yet (by means of a randomized double-blind study with a control group). The process that precedes this is very long, just like the research itself.

But there is no doubt that this has to be investigated. First of all, because regular medication or treatment for ADHD, depression and cluster headaches often does not work. Also, as many patients following the regular medication often complain about the side effects that heavily affect their wellbeing. They continue to look for an alternative solution.

Below, we’ll highlight the areas of mental / physical health in which microdosing shows most promise. But first, take a look at these videos to get a general sense of how microdosing could help improve people’s lives.

An interview with Theresa, a microdosing mom for whom it helps with her depression:

How LSD and mushrooms could help to treat anxiety, addiction and depression:

Although, Toby Lea’s Microdosing Survey study clearly shows that many people benefit from microdosing as a support against their depression. 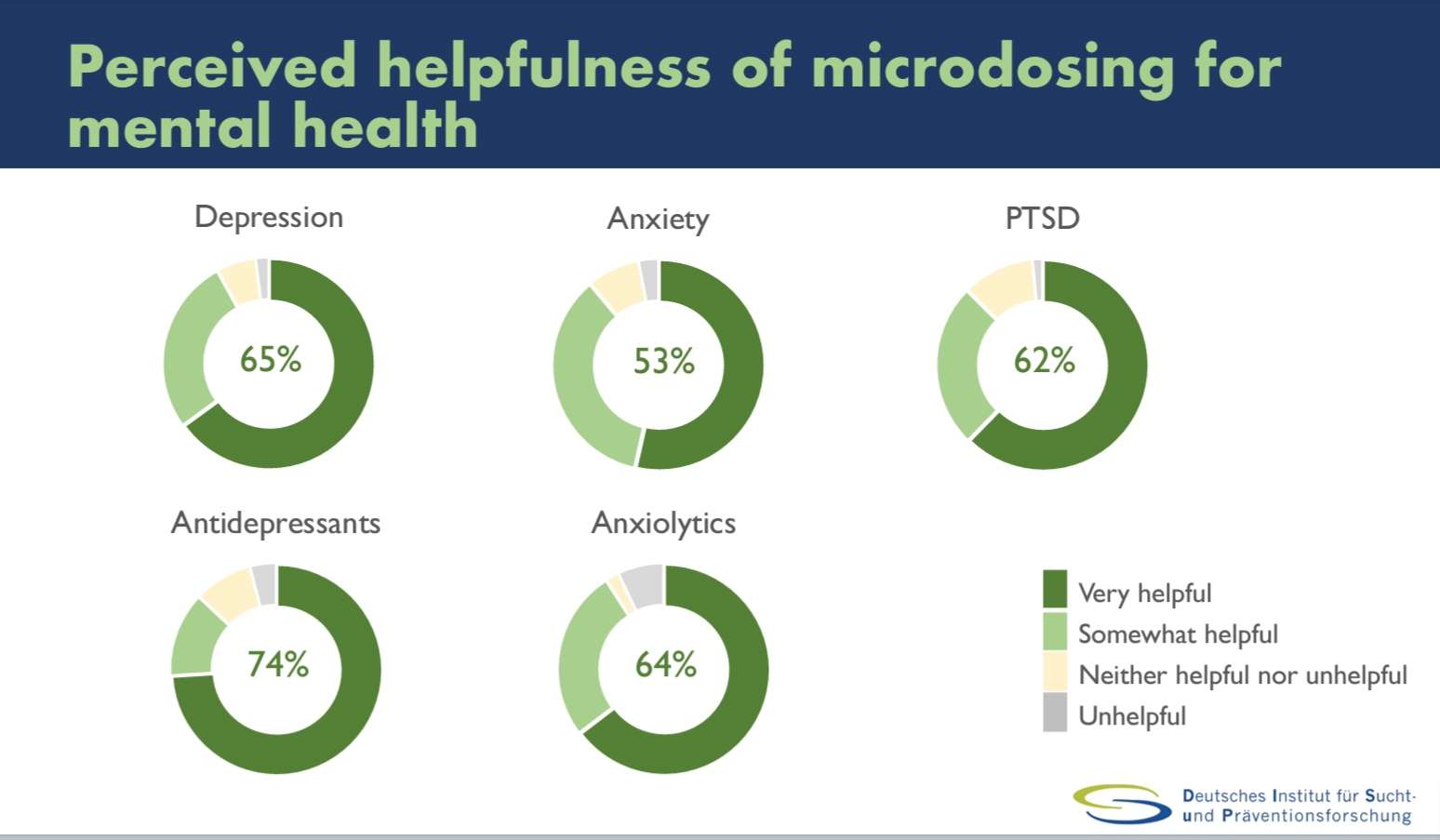 Microdosing is very promising in the treatment of cluster headache, which is often described as an unbearable headache that would feel heavier than for example a childbirth or kidney stones. Cluster headache patient platform Clusterbusters takes the lead in research into psychedelics as a potential treatment for cluster headaches. They claim that many patients (~80%) in their network have found relief through the use of LSD, the legal analog 1cP-LSD and/or magic truffles and magic mushrooms, while all the other treatments have failed. In many cases, these substances ensure that the headaches stay away. The doses used by patients to treat their headaches are generally a bit too large to be considered sub-perceptual, yet within this group there is sufficient evidence that microdoses can also be effective. In many cases we talk about minidosing. 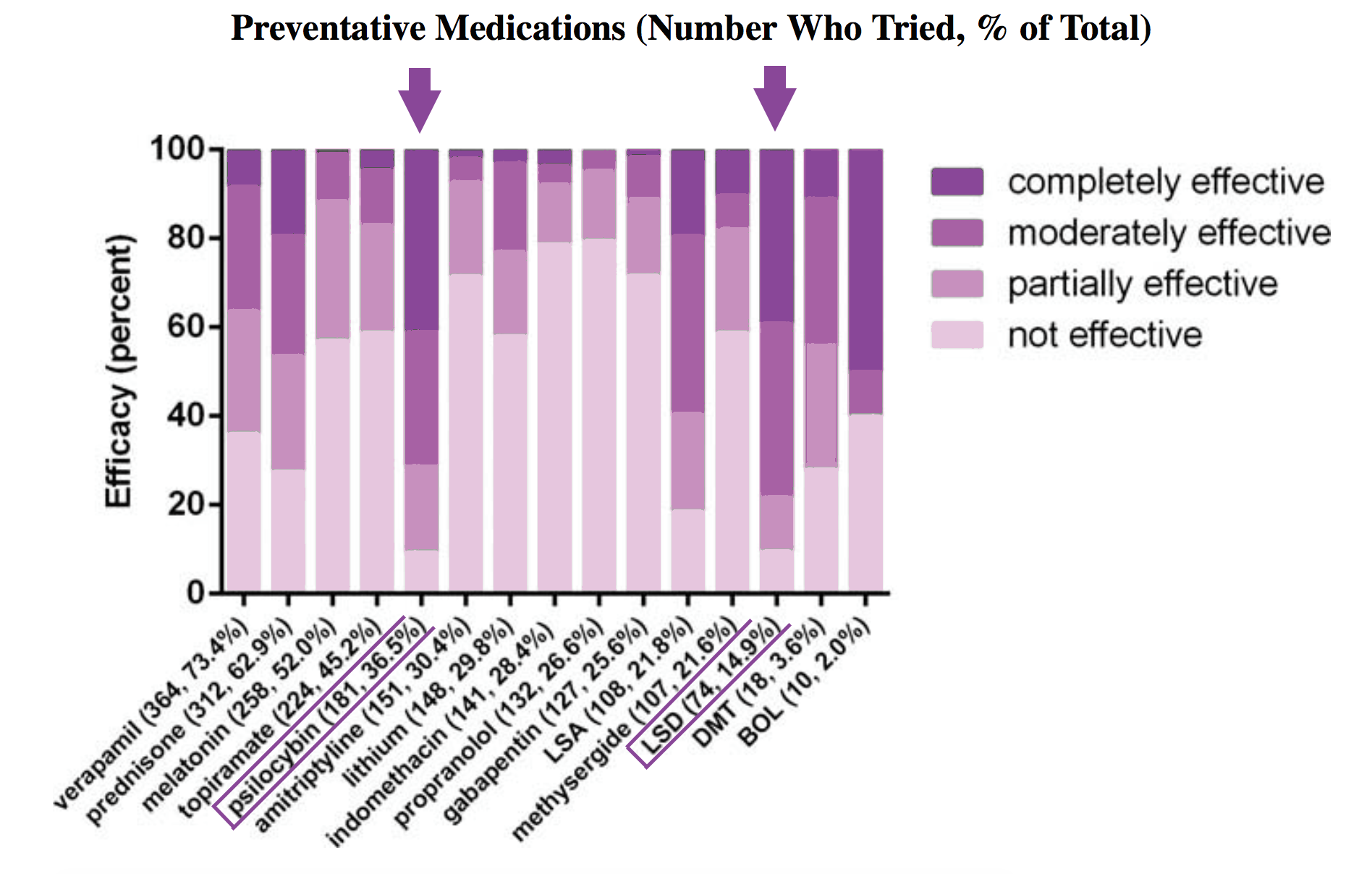 In his research, James Fadiman quotes a patient who managed to get rid of her “ice pick headache” through microdosing LSD. She was able to achieve the same result several times over the next few months. Since then, her cluster headache has stayed away.

Read here a report of a patient who managed to stop his attacks thanks to microdosing truffles.

Scientific research on patients with cluster headaches is (finally) starting in the US and Canada. This is expected to definitively demonstrate the effectiveness of psychedelics as a remedy for this disorder.

Below you can watch Bob Wold’s (founder of Clusterbusters) presentation on treating cluster headaches with psychedelics:

Are you suffering from cluster headaches? Join our unique research project and discover how magic truffles could help you in preventing, disrupting or busting cluster attacks. Click here for more information and registration.

The short video below presents how depression works from the biological point of view:

As microdosing psychedelics can have a positive impact on one’s focus, it might be a suitable substitute for ADHD medications and other pharmaceutical cognitive enhancers.

A participant in Fadiman’s study reported that microdosing helped him to phase out his use of Adderall. Adderall is a notoriously addictive ADHD drug that, like Ritalin, is also used by college students for all-night study. Albert Hofmann has always been saying that if LSD had been legal, it would be a side-effect free substitute for Ritalin or Adderall. Nowadays many people with ADHD and ADD who microdose, use the legal variant of LSD: 1cP-LSD and 1P-LSD.

Carl Hart Harris PhD, professor of biochemistry at Columbia University says: “Adderall is nothing more than the amphetamine (speed) that is sold on the street and in the nightlife scene. So the drugs that are bad for your brain and which possession is illegal are the same drugs that we give to hundreds of thousands of children every morning”.

Fadiman’s research team has prepared a list of all medications and supplements that have been combined with microdoses without causing any problems so far. This data comes from their fieldwork research in which people who microdosed on their own initiative voluntarily shared their findings. The psychoactive substances used for microdosing were LSD, 1P-LSD or magic mushrooms.

Fadiman and Korb’s research has shown that microdosing can be effective in a wide variety of medical conditions. Depression, ADHD and cluster headaches are perhaps the most significant of them.

These relations have to be further investigated in a clinical setting through multiple controlled, double-blind trials. Only when the results are positive, the work can continue towards making these resources available for authorized doctors and practitioners.

There are still a lot of people for whom the existing treatments for their complaints are not sufficient. Patients very often experience many side effects of regular medicines. As microdosing seems to be not only safer but also a more pleasant alternative, development in this direction feels necessary and hopefully won’t take too long.

Despite the illegal status of psychedelic substances, we believe that patients who have found microdosing to be an effective treatment for their health problems such as ADHD, cluster headaches and depression should at least be able to use it in a safe and legal way.

This information is provided for informational purposes only. It is not intended to replace a professional medical treatment. The Microdosing Institute does not make medical claims under any circumstances as long as it has not been clinically / scientifically researched. Always consult a medical professional first.

Do you have experience with the medical application of microdosing? Was it positive or negative? Let us know! We work with various scientists to map, as accurately as possible, the medical benefits of microdosing. This branch of science is still young so every experience, including yours, is very valuable.