Although the term microdosing has been in use only in the last decade, the phenomenon itself has a long history. How did people come up with the idea of taking small doses of powerful psychedelics? The history of microdosing probably goes as far back as the beginning of humanity.

The first humans: Evolution due to psychedelics?

Most people are familiar with Charles Darwin and the Theory of Evolution. But have you heard of Terence McKenna’s “stoned ape” theory’? According to the theory, psychedelics caused the Homo erectus to eventually become Homo sapiens. In his book, Food of the Gods, he explains the North African continent was becoming drier and drier, turning into grasslands towards the end of the most recent ice age. Our ancestors, who previously lived in the trees, had to adapt in order to survive. McKenna claims that these humans were hunter-gatherers who were in the vicinity of herds of animals. Therefore, it’s plausible that they found psilocybin-containing mushrooms that are known grow on cattle droppings.

An experiment by psychologist Roland Fischer in 1970 shows that low doses of psilocybin (microdoses!) improve our vision. The theory states, that this vision improvement could have helped our ancestors hunt, gather food, and discover predators. The introduction of these mushrooms in the diet of early humans could have enabled them to live (more) consciously, increase their learning and subsequently move up the food chain. That would be the beginning of the symbiotic relationship between magic mushrooms and humans.

Although the stoned ape theory has yet to be proven, it appears plausible. It’s true that psychoactive substances can be found in herbs, roots, plants, seeds, and mushrooms everywhere on the planet. It seemed to have been only a matter of time before cultures all over the world would discover and started to use them in various ways.

Until this day, many indigenous cultures have a shaman, a person who serves both as a doctor and spiritual leader of a community. In South America, the shaman (also known as a vegetalista or curandero/a) uses psychoactive plants to get into contact with “the higher realms.” Many cultures believe that such plants are the embodiment of a plant spirit and that by consuming them, one can improve contact with this wise primal force. This occurs not only with consumption of high doses, but also with low doses, or microdoses as we have coined them today.

Tangible evidence that mushrooms were consumed in the Old World comes from cave drawings of 10,000 B.C. on the Tassili plateau in the Sahara of Algeria, showing anthropomorphic dancing mushrooms. On various images of mushrooms and objects from the Bronze Age that were decorated with mushroom-like images. The “Mushroom stones” of Mexico—dancing figures with a mushroom hat—date from 1000–500 BC. 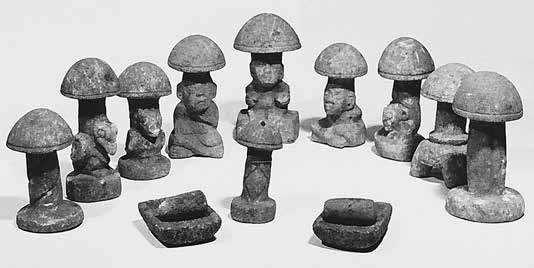 The second wave: the Western 'Discoverers'

When Albert Hofmann, a Swiss pharmacological researcher, accidentally synthesized LSD in 1938  from the ergot fungus and experienced the ever-first LSD trip, it marked the beginning of a second wave of psychedelics in Western society. With it came profound research into psychedelics and the famous counter-culture or hippie movement.

At home, I lay down and fell into a not unpleasant drunken state, characterized by a very stimulated imagination. In a dreamlike state, with my eyes closed (I found the daylight unpleasantly powerful), I saw an uninterrupted flow of fantastic images, extraordinary shapes with an intense, kaleidoscopic play of colors.

LSD was first utilized in psychotherapy and scientific study in the 1950s, mostly to treat anxiety, depression, addiction, and psychosomatic diseases. LSD was the subject of intensive (psycho) pharmacological study, which resulted in almost 10,000 scholarly papers. In the years that followed, medical experts, scientists, and even the U.S. government expressed an interest in the novel chemical. The CIA’s infamous MK ULTRA program looked at the use of LSD for “mind control” and chemical warfare. The scientific and ethical standards of the experiments were questionable, to say the least.

In 1966, a team of a scientist under the leadership of Dr. James Fadiman studied the influence of psychedelic agents on participants’ creative problem-solving skills. In the “Psychedelic agents in the creative problem-solving” experiment, they tested 27 people working in creative professions such as engineers, architects, scientists, and designers. They gave them 200 milligrams of mescaline sulfate (This is comparable to 100 micrograms of LSD, so hardly a microdose) and had them work on a work assignment or problem. The results are positive. The participants came up with technologically advanced project proposals, products, and solutions that have been mostly accepted by their clients.

Shortly after this experiment, the FDA banned all scientific research on psychedelics. The influence of psychedelics on our creativity and problem-solving ability could not be investigated further for decades that followed.

From macro to micro

We know from that Albert Hofmann microdosed for a few decades. When he microdosed, he took  walks in the forest, where it would help him think more clearly. He turned 102, and at the age of one hundred, he still gave long lectures. He’s the one who introduced the concept of microdosing to others and has always said that microdosing should be researched scientifically.

After years of independent research, Dr. James Fadiman devised a microdosing protocol to guide people want to experiment with microdosing. This protocol includes a number of concrete guidelines of when to microdose and the invitation to keep a daily journal of the experience. Since then, the number of inquiries and reports has been rising exponentially. By now, he has received more than 1850 reports, part of which he has analyzed together with Sophia Korb.

NOTE: At this moment, he’s solely interested in reports from people who microdose for medical reasons. Soon more information via the website of the study.

The third phase in the history of microdosing is that of a rapidly increasing awareness of psychedelics and microdosing, at least in the Western world. The awareness has been surging after microdosing gained a lot of media attention in 2015 with articles in Rolling Stone Magazine, Forbes, and a podcast by Tim Ferris. Soon after that, Microdosing Institute and other pioneering organizations like The Third Wave started to provide education and community support.

Research into the effects and medical applications is rapidly increasing with organization like The Beckley Foundation, Imperial College London, and Maastricht University have been leading the way. Additionally, we see many other institutions and companies collaborating to research the potential of microdosing a treatment for many conditions such as migraines, inflammatory pain, cluster headaches, ADHD/ADD, OCD, TBI, and hormonal imbalances in women.

Unfortunately, many microdosing substances are still not legally accessible in most countries (except for Caapi Vine and Truffles containing psilocybin in the Netherlands). Nevertheless, those who wish to microdose safely and effectively have access to a variety of online courses  workshops, retreats, and microdosing-assisted coaching